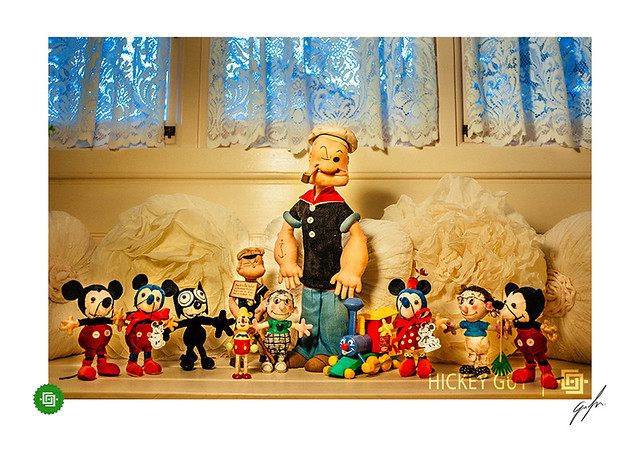 This is a different one indeed – Charlotte Clark was most known for her Disney related character dolls, but she had in fact had a very broad and open-eyed creative vision. Throughout her doll-making career, Clark created many dolls of many great characters, and one most noteworthy doll she made – a ‘Bugs Bunny’ doll, which was of particular importance to her nephew Bob Clampett (whom had worked closely with Bugs Bunny/Tex Avery/Warner Bros). In the following photograph, you can see a range of Disney character dolls that she had made for her family, including characters from the book/aborted film ‘The Gremlins’. Here, most wonderfully captured, Bob with a Charlotte Clark Bugs Bunny doll… Bob with his Aunt’s dolls.

I am sure she would have created many, many dolls for herself and her own personal collection. Popeye, a ‘Fleischer Studios’ hero figure, was at one point the most popular cartoon character in the United States during the 1930s (surpassing Mickey Mouse). After what I have examined this week, with charm and great appeal, I am so sure that Charlotte Clark would have created a Popeye doll. But, this is no sure thing, given that only her more mass produced dolls for Walt Disney were ever stamped (on the foot), or later on included a tag, meaning her non-mass-produced more “personal” dolls were always unmarked and unlabeled – which is where pattern dolls most regularly get mistaken for original handmade Charlotte Clark dolls (in a lot of auctions) and visa-versa. This is a topic of which can cause quite a stir in the belief’s of others when it comes to identifying Charlotte Clark dolls, as information regarding the identification of Charlotte Clark dolls can become confusing and complex to a lot of people. But really, it is quite simple to distinguish between and realise/identify what-is-what, especially after 40+ years of knowledge building and reference.

Let’s take a step back and go on a little journey. My Dad is an explorer (a journey through the imagination), and has been since the 1960’s. With the incredible advent of the internet, my Dad has made the effort to dig through the depths of eBay every single day, as a ritual, since 2002. The internet has become a great tool in learning and expanding our reach as far as information gathering is concerned. The world and its contents have become more accessible with this technology at hand. At times, rare and wonderful things catch my Dad’s eye. On one particular occasion not too long ago, a Popeye doll came up for sale, that had that great look of character (I see it as Art, much like Mel Birnkrant). Dad immediately recognized the style, and saw that classic Charlotte Clark “look” in the doll. It was expensive, and over a series of months, no-one bought it and the price gradually became lowered and further lowered. It finally reached a low enough price to be worthwhile for us, and we were lucky enough to buy and receive it. Upon arrival, and close inspection (this week’s examination), details came to light that were not fully apparent on the computer screen. There were tell tale indications, and clear trademark details to this Popeye doll that rang our Charlotte Clark bell. 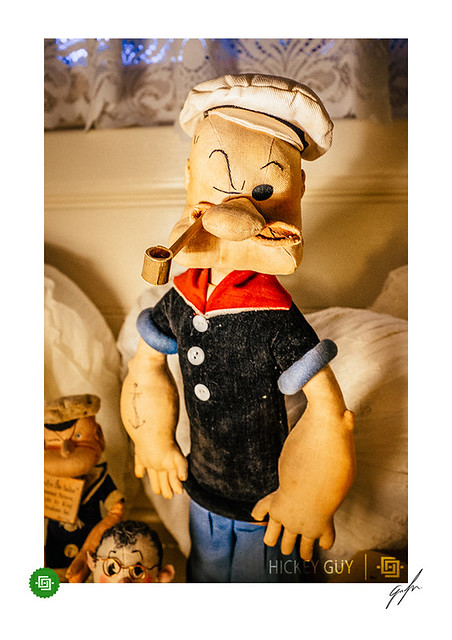 Here are a series of links to listings on Hakes (from Auction #201 in 2010) which I think are very much worthwhile looking at, as the photos are so valuable for reference – to be able to closely see without having any dolls in hand to look at in the flesh. It is also always a delight to see other dolls that exist out there! And further evidence that she created dolls unrelated to Disney =

Charlotte Clark created very distinct dolls – her designs are very unique and her style is very consistent (hands, eyes, materials and stitching being key things to look out for). We could see that this Popeye wasn’t a mass produced doll, but rather homemade. But then way “too good” to be simply homemade. With basic analysis and comparison to other known Clark dolls – specifically using for photo reference, a new/recent article by Julie Blewis (Photography by Andy Ourant), you can see for starters that Popeye’s hat is built much the same as Donald Duck’s hat – Also has the same shiny leather strap on the hat and belt like Peter Pan’s belt material (ref. J.Blewis article) – the exact same ‘circle dot’ oil cloth eyes like Jose Carioca, Dumbo & Pinocchio, but without the “cut” for example. The buttons used on Popeye match exactly to a couple of dolls I compared to. Also, the proportions are very similar to ‘the Goof’ – which is a great thing to have at hand, to compare structure and construction, with the shape of the feet (with solid sole’s – the shoes are almost identical!) and general figure build with wire frame making him stand (like most of all the other Clark dolls). You have to hold him to truly appreciate these details! The seams and the fine/tight stitching holding all the material together is so very much like all other Charlotte Clark dolls (upon far and very close inspection). The stuffing is also very refined throughout the body and also very solidly packed where needed, and small details very much so noteworthy (eye-brows and other details). The one thing that is “different” in my eyes, is how the head is constructed, pattern wise – but this yet, further shows how expertly crafted this doll is (someone with experience had to know how to build this doll).
The hands are a huge sign, and rather quite obvious after lengthy comparison. And you can see the same style and design of Clark’s handiwork, design-wise and technical-wise. There is something very easy to recognize and and identify with all of Clark’s dolls. This is something that no other maker or handmade doll creator has been able to replicate or reproduce. All of these things considered – This is highly likely, a Popeye doll created by the hands of Charlotte Clark herself. Of all the doll’s we have come across in our time “exploring”, this is one of the most compelling dolls we have ever come across. So very interesting! 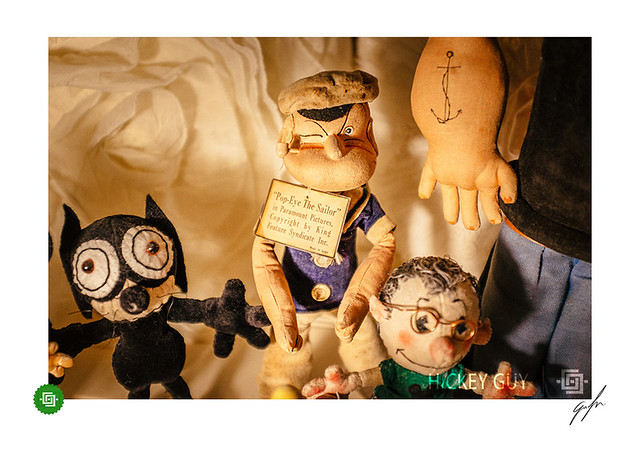 Popeye ‘Made In Japan’.

In the initial photograph at the top of this posting, there are lots of other dolls included. The other Popeye doll much smaller than the one in the middle, is a very cool Popeye, for the details are very delicate and compacted. He is ‘Made In Japan’ (by Paris Novelty Company), has hollow wooden shoes (almost cardboard-like) and velvet clothing. His features are very finely painted, and actually resemble the first Popeye in ‘Mel Birnkrant’s Popeye Section/Showcase’. Actually, further down the showcase page, you can see a centerpiece doll which is very similar, although different in some aspects to the main Popeye doll I am headlining here in this posting. The tattoo, clothing and facial features are obviously different in appearance, but somewhat similar nevertheless, just to name a few. This needed to be included here for it is very much similar, but so different – it might possibly be smaller in size, making certain features such as the rolled up sleeves, harder to create between both sizes (the shirt material and belt also are completely different). All very interesting to think about and consider! Mel Birnkrant lists his Popeye as ‘UNKNOWN’, but I believe with examination and an archive of history research and reference, you can possibly find a maker – in this case, most likely Charlotte Clark (or her clone!).
The wooden Pinocchio figure is a hard-to-find ‘George Borgfeldt’ piece that may have come in a range of 3 sizes – this being the “medium” size. Also a cool Strombecker Casey Jr. Wooden Locomotive which came out as a souvenir toy in Disneyland, around when it first opened. 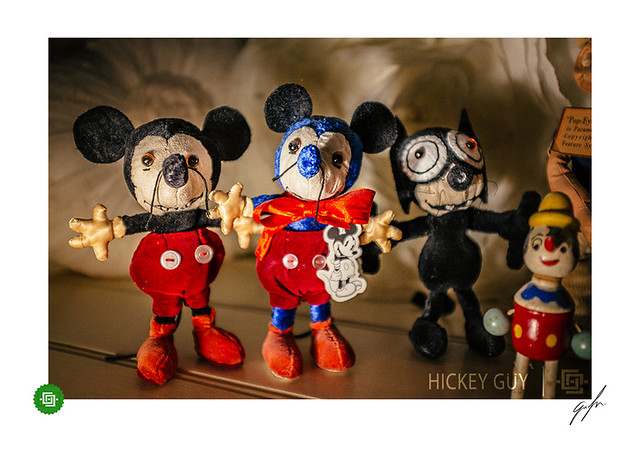 Hickey Mice and Felix The Cat.

The other dolls surrounding, are dolls which I have created myself, since January (2K17). I became inspired by how cool the small Steiff doll was, and thought of how Charlotte had created a tiny Mickey. This made me want to try and create my own, using a pattern that my Dad & I made together. The two blue dolls (Mickey 1 & Minnie 2) are my first concept Mice (also Blue because I didn’t have any Black). The two normal coloured ‘Mickey/Hickey Mouse’ dolls are numbers 3 & 4. And the other two dolls are a creation I made afterwards for my Mum & Dad for their 30th Wedding Anniversary in April (the 18th). I also had a go at creating a Felix The Cat with detachable/pose-able tail (you can bend it into a question mark?). This was particularly difficult, as the velvet was not as easy to work with when creating ‘hands’ (as opposed to the strength of Satin or suede leather).
Though, the towering Popeye is the star of this particular posting. 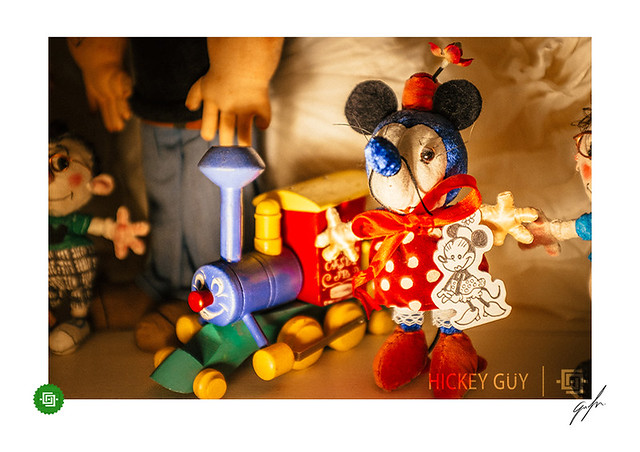